The castles of the lands of Duchy of Albuquerque

Since the fifteenth century Don Beltrán de la Cueva, deprived of Henry IV of Castile was created Duke of Alburquerque, there have been many possessions that the Duchy has been accumulating throughout history. Some granted as mercies of the kings for the services that their members lent to the crown, and other arrivals through marriages.

The route begins in Beltrán de la Cueva's most prized possession: his villa de Cuéllar, which he arrives in 1464 after his resignation from the Maestrazgo de Santiago. In her it fixes its residence and begins with the works of remodeling of the strength, that had belonged before to another valid one, to Don Alvaro de Luna.

The strength that Beltrán de la Cueva found in Cuéllar had just been reformed by order of the constable under the works of Juan Guas, so the renovations carried out consisted in expanding the defenses in the existing work with the Hanequin masters of Brussels and their son Hanequin de Cuéllar. Of this time it is the barbican or outside liza, that raised before the fear of an attack of Isabel the Catholic, that did not stop in the reclamations on señorío of the town of Cuellar.

From Cuéllar we moved to Fuensaldaña, whose County joined the House of Alburquerque when it falls in the nineteenth century in Nicolás Osorio y Zayas, Marqués de Alcañices and father of Pepe Osorio, famous mayor of Madrid known for his title of Duke of Sesto .

In Fuensaldaña we find the Vivero castle, built in 1452 on behalf of Alonso Pérez de Vivero, secretary and accountant of Juan II of Castile.
From Fuensaldaña we reach Villanueva de Cañedo, where we find the Castillo del Buen Amor, built on the initiative of the Casa de Alba on an 11th century fortress. In 1477 it passed into the hands of Bishop Fonseca, whose descendants gave Felipe II of Spain the title of Condes de Villanueva de Cañedo, title linked to the Marquesado de Alcañices.

Without leaving the land of Salamanca, we reached the town of Ledesma, one of the first properties that Beltrán de la Cueva received, in 1462, with the title of Count. The construction of the castle was ordered by Ferdinand II of León in the twelfth century, although almost the entire current building was erected by Beltrán de la Cueva and his successors.

From Ledesma we moved to Mombeltrán, formerly Colmenar de Arenas, whose name he modified in 1461 to take that of his new master, Beltrán de la Cueva. It was built by Beltrán himself, according to Cooper between 1462 and 1474, attributing it to the architect Juan Guas.

We arrive at the last stop on the route: Alburquerque, head of the House founded by Beltrán de la Cueva. It arrived at the señorío of the town with the title of Duke in 1465, and until 1472 it realized works in the castle that before had belonged to Alvaro de Luna. New palatial rooms, defense barbacan and a pentagonal tower known as the Five Pointers Tower, which connects with the keep. 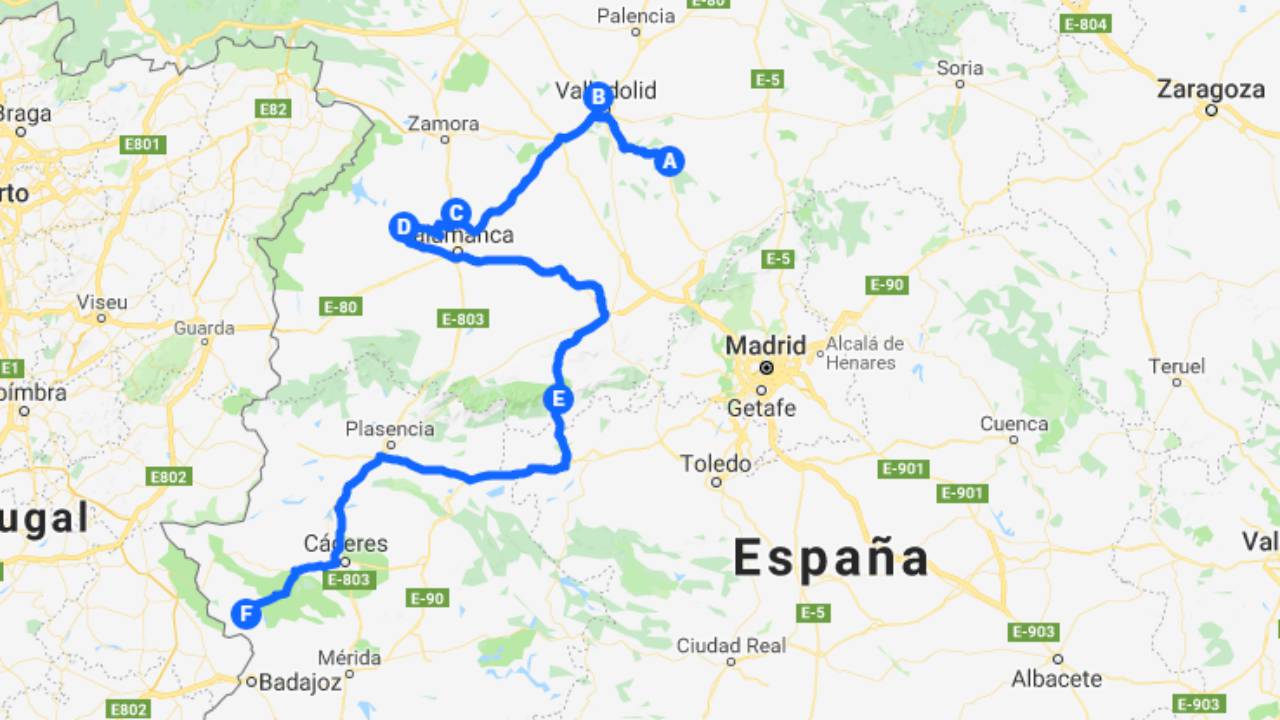 It stands on a Celtiberian fort, and was built from the eleventh century attached to an angle of the wall. Its construction continued until the seventeenth century, so it has a mixture of architectural styles, but predominantly Gothic and Renaissance.

Some of the most famous architects of the time were involved in its construction: Hanequin of Brussels, Juan Guas or Juan de Álava, creator of the parade ground.

It is irregular in shape and covers a surface area of 1,025m2. Its parade ground stands out, as well as the 20m high keep, which connects with the eastern bay that housed one of the most valuable armouries in Spain. It is surrounded by an outdoor barbican, and connects with the castle's ancient hunting forest through a rammed earth wall. This forest is now a municipal park.

It was owned by royals such as Álvaro de Luna or Beltrán de la Cueva, and its most illustrious guests include the kings of Castile, such as Sancho IV, or his wife Doña María de Molina, who made up the courts of the kingdom in 1297, or Juan I and his wife Doña Leonor, who died in the castle. Also noteworthy are the painter Parcerisa, José de Espronceda, General Hugo and the Duke of Wellington.

In 1997 the Castillo Habitado (Inhabited Castle) was created, the first guided tour featuring a historical re-enactment in Spain. In addition to being a space for tourists, it is also a Secondary School, and headquarters of the Foundation of the House of Albuquerque, which stores one of the most important royal archives in the country