Following the footsteps of Mendoza

Route that will take us through two sites of the powerful family of Mendoza. The first of these is the castle of Manzanares el Real, built as a family residence by the first Duke of the Infantado. The second, the Cuéllar castle, did not belong to the family, but its coat of arms hovered in the main façade due to the link between Beltrán de la Cueva, the owner of the castle, and Mencía de Mendoza, the daughter of the first Duke of the Infantado.

The construction of the castle of Manzanares el Real was promoted by Diego Hurtado de Mendoza (1417-1479), I Duque del Infantado. The works had already begun in 1475 on a Romanesque-Mudejar church, and were entrusted to the master architect Juan Guas, who used the Gothic-Elizabethan traces with Hispanic-Muslim influences.

It is not a medieval castle of defensive type to use, but due to the time of its construction is more to the idea of ​​transmitting an image of wealth and power that defensive needs.

It now houses an interpretation center on the Middle Ages, with a collection of tapestries, paintings, armors and furniture from the 16th to the 19th centuries. Although it remains the property of the Casa del Infantado, it is administered by the Community of Madrid.

Daughter of Diego Hurtado de Mendoza, I Duke of the Infantado, was Doña Mencía de Mendoza and Luna, who married Beltrán de la Cueva, valid for Henry IV of Castile, master of Santiago and I Duke of Alburquerque. This circumstance makes that the shield of Mendoza lives on the main facade of the Cuéllar castle, our next destination.

The castle of Cuellar arrives at the hands of Beltrán de la Cueva by royal donation in 1464, fixing his court and residence there.

The strength that Beltrán de la Cueva found in Cuéllar had just been reformed by order of the Constable Álvaro de Luna under the works of Juan Guas, so the remodeling carried out by Beltrán de la Cueva consisted in expanding the defenses in the existing work with Hanequin masters of Brussels and his son Hanequin de Cuéllar. Of this time it is the barbican or outside liza, that raised before the fear of an attack of Isabel the Catholic, that did not stop in the reclamations on señorío of the town of Cuellar.

In the main door of the castle the shields of Beltrán de la Cueva and Mencía de Mendoza, presided over by Enrique IV de Castilla. 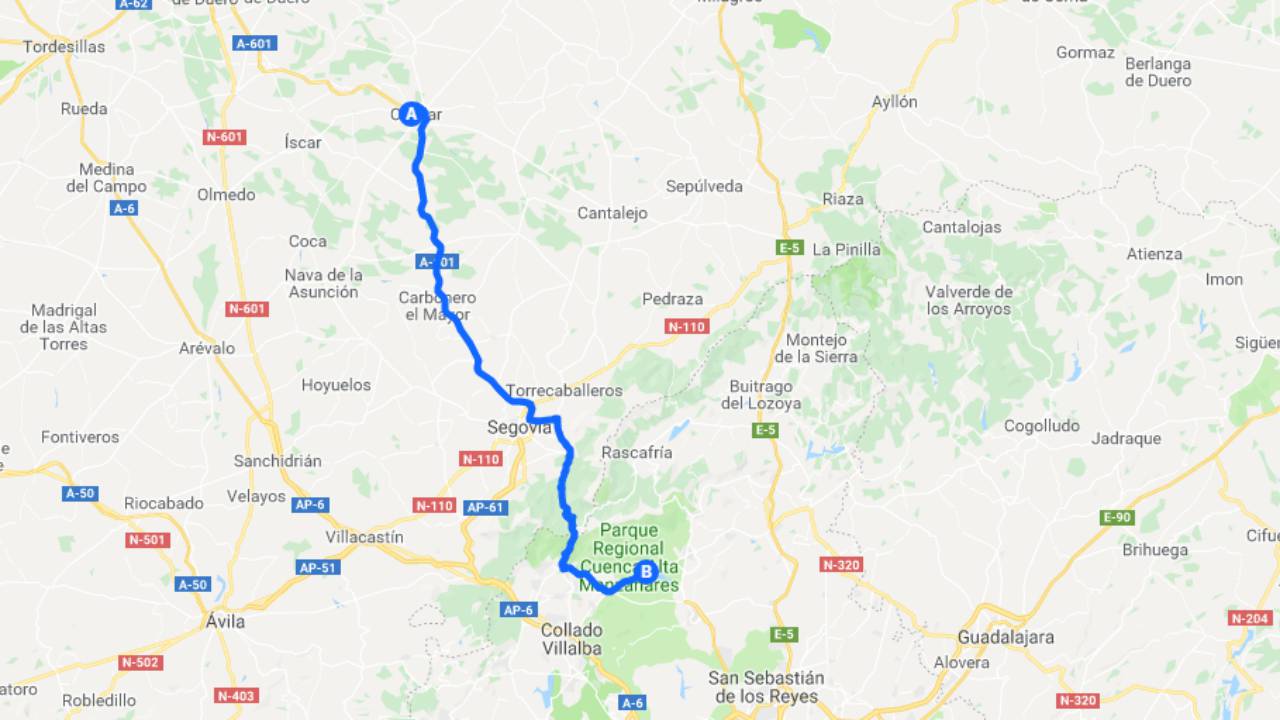 It stands on a Celtiberian fort, and was built from the eleventh century attached to an angle of the wall. Its construction continued until the seventeenth century, so it has a mixture of architectural styles, but predominantly Gothic and Renaissance.

Some of the most famous architects of the time were involved in its construction: Hanequin of Brussels, Juan Guas or Juan de Álava, creator of the parade ground.

It is irregular in shape and covers a surface area of 1,025m2. Its parade ground stands out, as well as the 20m high keep, which connects with the eastern bay that housed one of the most valuable armouries in Spain. It is surrounded by an outdoor barbican, and connects with the castle's ancient hunting forest through a rammed earth wall. This forest is now a municipal park.

It was owned by royals such as Álvaro de Luna or Beltrán de la Cueva, and its most illustrious guests include the kings of Castile, such as Sancho IV, or his wife Doña María de Molina, who made up the courts of the kingdom in 1297, or Juan I and his wife Doña Leonor, who died in the castle. Also noteworthy are the painter Parcerisa, José de Espronceda, General Hugo and the Duke of Wellington.

In 1997 the Castillo Habitado (Inhabited Castle) was created, the first guided tour featuring a historical re-enactment in Spain. In addition to being a space for tourists, it is also a Secondary School and headquarters of the Foundation of the House of Albuquerque, which stores one of the most important royal archives in the country

The castle was built in the 15th century by the 1st Duke of the Infantado, Diego Hurtado de Mendoza. The works were carried on by his son Íñigo López de Mendoza, who brought the architect Juan Guas into the project. Guas was one of the highest representatives of the late gothic style in Castile and the architect of the Catholic Monarchs.

The Dukes of the Infantado were the son and grandson of the Marquis of Santillana, the author of the renowned Serranillas genre of poetry. This building is the architectural hallmark of a society that bridged two eras, that of medieval chivalry (defensive elements such as the outer wall or the angled entry) and the renaissance humanist era, with its great drawing rooms, decorated façades and vantage points more often found in palaces.

Even though there was already a castle in the town, Diego Hurtado de Mendoza decided to build a new one from the materials of the old to create a building in keeping with the relevant position the ducal house was acquiring. The entire building is enhanced with the robust defensive outer wall and the wall walk. The castle has undergone successive refurbishments such as the one completed in 2007 involving various building works to create an interpretation centre and to refurbish the interior rooms, with a décor that sought to match the historical era of the collection of tapestries that bedeck the monument.

Furthermore, in recent times the castle’s landscaping has been reconditioned and a space created featuring different aspects of life as it was in the late 15th century.