Route that remembers the limits of the East and the North with the Nazari Kingdom of Granada and that played a fundamental role in the reconquest of Granada and after the reconquest. It is about the territories that were part of the Kingdom of Murcia and where located is one of the castles-protagonists of this route, the Castle of the Fortress of the Sun in Lorca. Most of the preserved remains are from medieval times.

The second territory from Lorca is the province of Jaén. To do this, we cross the province of Granada, to get to Alcalá la Real and visit the Fortaleza de la Mota, dating back to the Nasrid era. In 1431 Alfonso XI conquered it and became one of the main border posts of the kingdom of Castile against the Nazari kingdom of Granada.

We continue our trip to the capital of the province of Jaén to visit the Castle of Santa Catalina, built by Fernando III. During the Christian conquest of the Guadalquivir valley Jaén resisted several sieges, until in 1246 the king of Granada, Ibn al-Ahmar, declared himself vassal of Ferdinand III, handed over the city and promised to pay a tribute. Jaén became a frontier square of the first order.

From there, we move to two locations to visit on one side the Renaissance Castle of Canena and on the other the Sacred Chapel of the Savior of Úbeda. These monuments have in common the hand of the architect Andres de Valdelvira s. XVI. The two towns stood out after the reconquest of Granada, thanks to the economic development of the time and the constructions commissioned by Francisco de los Cobos, Secretary of the Emperor Charles V. 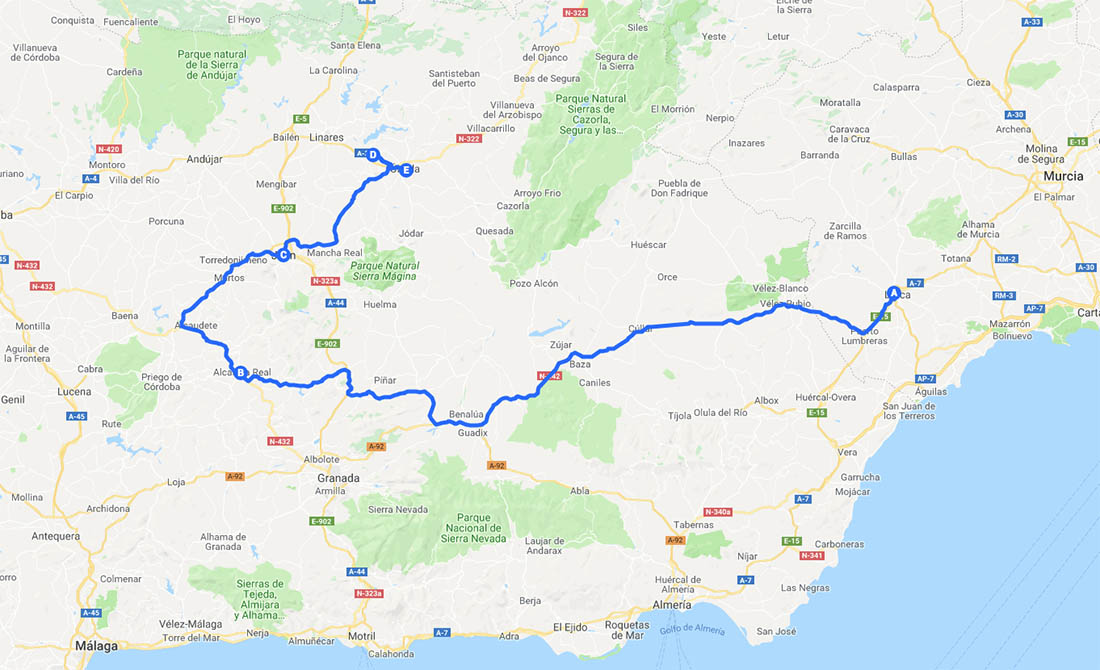 Castle of Lorca-Fortress of the Sun

The Castle of Lorca, declared BIC (Heritage of Cultural Interest), was a defensive bastion during centuries (in the Middle Ages), on the frontier between the Christian kingdom of Murcia and the Nazarí kingdom of Granada. After some years of work for its consolidation and rehabilitation, it opened its doors in 2003 and can be visited every day of the year, finding different proposals, exhibitions, workshops for children, guided tours, extraordinary season activities, in short, a space to learn the History and Culture of Lorca.

The Castle is a symbol for all the inhabitants of Lorca. From its privileged location, in the Guadalentín valley, it has been inhabited since the Bronze Age, which has made it an exceptional archaeological site to know the past, from Prehistory to the present.

The current appearance of the Castle of Lorca is the result of the continuous changes that the different cultures have been carrying out in its 52,000 m² of extension. Thanks to archaeology we know the Argaric burials of 3.500 years and the Roman vestiges that hide its subsoil. Nevertheless, the definitive configuration of the Castle took place in the Middle Ages, a period during which most of the preserved remains correspond. Synagogue and a Jewish quarter from the 15th century are the most recent discovery that can be visited every day of the year.

Depending on the season you can do different activities that complement the cultural visit like music, gastronomy... There are also offers for different types of visitors: families with children, schoolchildren, groups and general public. Pets are welcome. The Castle is an area to learn and have fun at the same time.

Know more about Castle of Lorca-Fortress of the Sun

The Fortress of La Mota, in the province of Jaén surprises by being a natural watchtower in a sea of ​​olive trees that houses the site of the city of Alcalá la Real until the 16th century. Currently the best preserved medieval urban group in Andalusia.

Its strategic location between the Alhambra of Granada and the Mosque of Cordoba houses the Interpretation Center Life in the Border, which reveals the importance in the history of Al-Andalus.

Qal'at Banu Said or Benzayde was his name from 713 to 1341, at which time Alfonso XI took it definitively and granted him the title of Royal, becoming a key, guard and defender of the Kingdoms of Castile against the Nasrid Kingdom of Granada, for 150 years.

Testimony of this definitive conquest is the Hidden City, a network of underground galleries, which had a major importance in the taking of the fortified city in the 14th century.

The Monumental Ensemble of the Fortaleza de la Mota retains its original urban layout and numerous vestiges of the medieval life system. Crossing its doors you will discover the elements of a fortified medieval city, such as the walls, towers and adarves, that together with the Alcazaba and the Military District of the city were part of the defensive system. Or its wineries, nevero, neighborhoods like El Bahondillo and palaces that have been here testimonies of another time so that you can contemplate them and transport you to a time of fusion of cultures and creeds. An audiovisual innovator in the Greater Abbey Church will thrill you and tell you his fascinating story.

The Parador de Jaén stands high above the city atop Santa Catalina Hill. Its emblematic figure dominates the horizon, so that as you approach Jaén, it will always be the first to welcome you. The hotel is your departure point and destination for exploring all of the charm of Renaissance Andalusia. The monumental appearance of its interior is maintained in the spectacular cross vault 20 meters high in the main function room, the dining room and the guest rooms with incredible panoramic views of the city.

Jaén's Barrio Antiguo (Old Quarter) has preserved the vestiges of a spectacular city. Nuestra Señora de la Asunción Cathedral; the Arab baths, the largest and most important in Europe; the Provincial Fine Arts Museum; and San Lorenzo Arch, recently declared a National Monument, are just some of the sights well worth visiting.

A visit to the surrounding area is an excellent option, allowing you to explore the Sierra de Cazorla mountains and Sierra de Segura region, with their exceptional nature reserves. Olive groves and the Guadalquivir River, which flows through this land, add special appeal to a place where the characteristic light of Andalusia never fails to make its presence felt.

The Canena Castle, erected by the Arabs on top of a Roman settlement, became a fortress of the Order of Calatrava during the reconquista. In 1538 it was acquired by Don Francisco de los Cobos, the Secretary of State to Charles V, who transformed it into a Castle Palace, lodging the Emperor himself under its roof.

The Canena Castle is one of the most important ones in Andalusia, and is the most emblematic building in the town of Canena, which is built around it. Though by the 16th C. the military architecture of the region no longer had a function as such, this fortress—dating back to before the 13th C.—was restored and transformed into a palace by Francisco de los Cobos, the great Renaissance patron of the Úbeda region. Andrés de Vandelvira (1509-1575) supervised the construction.

Located in the rich Guadalquivir Valley and near Úbeda and Baeza (both World Heritage cities), the Canena Castle was declared a National Monument in 1931. It is privately owned and lends its name to the family business of its owners (Castillo de Canena Extra Virgin Olive Oil).

Brief summary of the castle’s artistic and historical heritage

The Canena Castle Palace (Jaén Province, Spain) was built in the 16th C. in the Spanish Renaissance style by the architect Andrés de Vandelvira (1509-1575). It belonged to Francisco de los Cobos and was mentioned by the Marques de Santillana in one of his famous serranillas, or short poems.

The building as it stands today was built in the 17th Century. It has an extraordinary interior courtyard, the second floor of which is ringed with a balustrade with Ionic columns, upon which rest beautiful architraves. It is now the private property of the Vañó family.

In 1538 Francisco de los Cobos, Secretary of State to the Holy Roman Emperor Charles V and a great patron of Renaissance arts in Úbeda and its surroundings, bought the Canena villa. The property became part of his extensive domains, which after his death were administered by his wife Doña María de Mendoza and her descendants, the Marquis of Camarasa. In Canena this great patron of the arts left us one of his greatest undertakings: the transformation of the castle into a sumptuous palace, designed and executed by Andrés de Vandelvira.

The Canena Castle is solidly built on a square plan, with two great circular towers that protect the corners of its main face and two smaller towers on the back side. The keep is in the center of the edifice. The whole castle was formerly surrounded by a moat—now filled in— and is equipped with a drawbridge.

The portal is a round arch flanked by Corinthian pilasters on plinths, with a frieze entablature decorated with grotesques and a cornice upon which another arch is raised. In the tympanum of this arch appears the coat of arms of the palace’s founders, with fantastic supporters at each side. The arch is crowned with stone torches and one can see the grooves for raising the drawbridge.

The interior courtyard is in Renaissance good taste, with a double loggia and a cloister stairway. The lower level is comprised of round arches with ornate keystones and relief medallions placed on alternate spandrels. The upper gallery has the peculiar feature of large ornate abacuses over the columns, which themselves rest on plinths decorated with military motifs, ringed by a stone balustrade.

With the erection of this chapel in 1536, an urban transformation of the city of Úbeda began, which, in a very short time, scarcely fifty years, produced one of the most outstanding and prodigious collections of Renaissance architecture in Spain. It was created under the patronage of the Secretary and Chief Adviser to Emperor Charles V, Francisco de los Cobos, and his relatives, with the purpose of creating an urban setting to match their dizzying heights of social ascension.

This monumental square, today known as the Plaza Vázquez de Molina, is presided over by a large church, la Sacra Capilla del Salvador the centerpiece, together with the neighbouring Baeza´s monumental ensemble, of Unesco´s World Heritage Site. This is Diego de Siloé’s masterpiece. Its architectural layout makes an ideal resemblance of the Holy Sepulcher built in Jerusalem where a basilica and a funerary  chapel are constructed in the same space.

The funerary chapel was constructed for the aforementioned Francisco de los Cobos and his family. Siloé’s project was executed by Andrés de Vandelvira, and the Sacristy may be entirely due to him.

The result is a Church at the very heights of the best Italian Renaissance architecture and partakes in the humanist ambition of fusing classical heritage with that of the Christian world, an ambition that is also present in its rich iconographic programme.