The castles of the Kingdom of Aragon (I)

This route of seven castles takes us through the expansion of Aragon in the Middle Ages, from a small county to a powerful crown that dominated the Mediterranean.

Our itinerary begins in the city of Jaca, the first capital of the Kingdom of Aragon. An enclave located on the border with France, in the heart of the Pyrenees, which in the 11th and 12th centuries suffered an extraordinary boom due to being part of the Santiago Way. From this city the first Aragon kings organized their expansion towards the south. In time, Jaca would lose political importance, but not military or strategic. So much so that in the 16th century, King Philip II ordered his chief engineer, Tiburcio Spannnocchi, to build a new type of fortification: The citadel of Jaca.

With the proliferation and improvement of firearms in the Modern Age, medieval castles ceased to be the ideal fortification prototype. So a new type of defense was designed, no longer based on height and towers, but the opposite. The walls widened and sank into the ground, moats, casemates and bastions proliferated, and bastioned fortifications were born.

The citadel of Jaca was the keystone of the defense of the border with France. Construction began in 1592, although it was completed seventy years later.

The importance of the Citadel of Jaca, also called Castle of San Pedro, is such that it is the only fortress its time and typology that is preserved intact and exempt in the world. It has a pentagonal floor plan with arrow shaped bastions at all angles, connected by a patrol path. It has a moat, the walled area, a residence area and service buildings to contain ammunition, foodstuffs and a church.

Currently, the Museum of Military Miniatures has been created inside the museum, which exhibits more than thirty thousand figures in its rooms. In Jaca, a visit to the cathedral and the Diocesan Museum with its spectacular collection of Romanesque paintings is a must.

At the beginning of the 11th century, the Kingdom of Aragon covered a small, rugged territory, on whose southernmost border the first great castle of the Aragonese kingdom, Loarre, was built.

Loarre Castle is one of the best preserved Romanesque fortresses in the world, currently listed by UNESCO. Loarre was an evolution for his time. It is made up of buildings from three different periods. An initial Lombard, until approximately 1035, ordered to be built by King Sancho III the Great of Pamplona. And that, in front of the castles of its time, formed by a single tower, a simple enclosure and a church as part of it, Loarre presents several towers and an extremely wide enclosure. It was built on the border between the mountain and the flat land, from which it was intended to assault the lands of the taifa of Zaragoza.

The second construction stage is of lesser importance and corresponds to the reign of the first king of Aragon, Ramiro I. But it is his son, Sancho Ramírez, who will make a magnificent extension, in Romanesque style, incorporating the splendid church of San Pedro, and enlarging the walled enclosure. King Sancho Ramírez travelled to Rome to be crowned by the Pope and on his return he brought with him the Roman rite, which would later be imposed on all of Spain, and the idea of converting Loarre not only into a military castle, but also into a royal chapel and palace.

Loarre has numerous elements of great importance, its tower of La Reina, the Albarrana tower, its crypt, bedrooms, the monumental church of San Pedro or the outer wall. It has been the setting for films such as Ridley Scott's The Kingdom of Heaven; the series The Ministry of Time; or the novel The Castle.

The visit to Loarre also allows you to see the Collegiate Church of Bolea through a joint entrance.

The third stop in Huesca takes us to the Templar Castle of Monzón, also famous for having housed the sword of El Cid, the Tizona; and for having been where King Jaime I the Conqueror was raised. It was an important Muslim fortress, conquered by Sancho Ramírez and, in the 12th century, ceded to the Knights Templar who reformed and expanded it. They became the headquarters of their military command in the Crown of Aragon and, when they were forbidden by the Pope, they suffered an epic siege in 1309 by the royal troops of Jaime II.

The castle stands on a hill to the southwest of the town, which is accessed from the northern slope, by means of long and steep ramps protected by numerous defensive elements made from the 17th century onwards to place artillery and firearms. Once upstairs, we reach the medieval enclosure composed of five independent buildings arranged around a parade ground: the church, the keep, the chapter house, the dormitory and the prison.

The temple was built in the 12th century by the Templars, in Romanesque style. Its apse serves as a tower on the outer wall and houses an exhibition on the Order of the Temple.

The keep, or Don Jaime's, is square in shape and was built by the Muslims between the ninth and tenth centuries. It houses exhibition spaces on the history of the castle and its terrace is a magnificent viewpoint.

The magnificent chapter house is used for cultural activities and there are underground galleries that descend to different neighborhoods of Monzón. In the city we can visit the Concathedral of Santa Maria del Romedal. 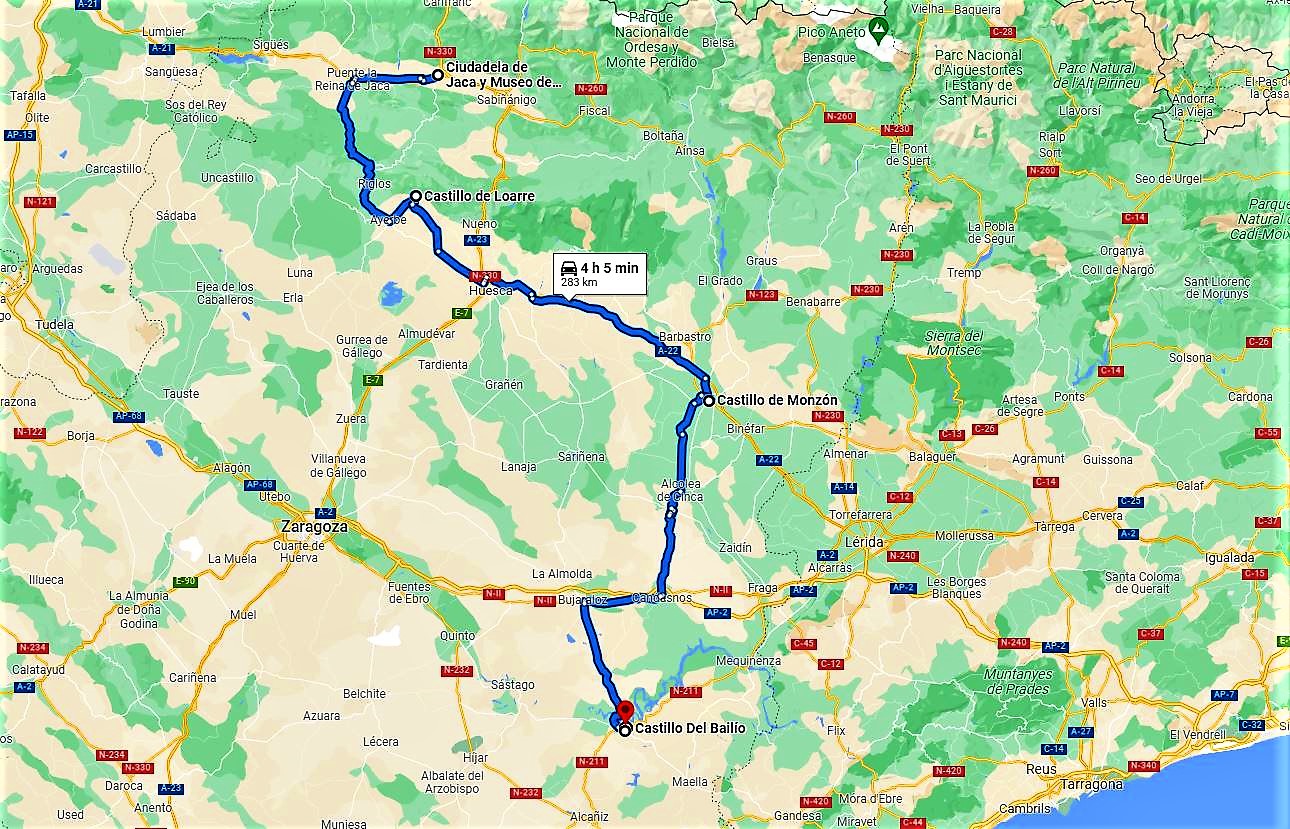 This route links with

The castles of the Kingdom of Aragon (II)

© Luis Zueco Our next stop on the route takes us back to the late medieval period, when[...]

The Castle of San Pedro, popularly known as the Citadel of Jaca, is the best preserved pentagonal fortification of S. XVI in Europe. Ordered by King Philip II, the first stone was laid in 1592, following the plans of the military engineer Tiburcio Spanoqui, born in Siena (Tuscany), but under the service of the King of Spain. This fortification was raised to defend and control the main route of penetration from France thrugh the central Pyrenees, in order to prevent attacks by French Huguenots, who were the Protestants fighting in that in country against the Catholic power. We are in the strategic pass of the river Aragon, easily accessible most of the year. For this reason, while the Citadel was being built, the castle of Canfranc and the towers of Espelunca (Aragon valley) and Santa Elena (Tena valley) were being erected and strengthened. Jaca would be the central point of the defense and logistical supply of the Pyrenean valleys of Ansó, Echo, Aragon and Tena.

The Citadel of Jaca was built to be adapted to the effective use of artillery, both defensively and offensively. Its perfectly regular plan is formed by straight lines and by angles that allow to line the weapons for a better defense. These angles are also designed to hinder the enemy’s attack. Gunpowder and the rapid evolution of artillery changed the construction of defenses. From the minds of military engineers and mathematicians like Sangallo, Vitelli, Francesco de Marchi, Niccolo Tartaglia, Pedro Luis Escrivá and, of course, Spanoqui came out geometric forms seeking defensive perfection and the pentagonal shape was the best option. Thus the citadel rose with five bastions, its main feature.

A fortification of these formidable characteristics responded to the need to firmly defend a strategic territory. At the same time, this type of fortress needed a plain from which to obtain resources and with which to defend. Jaca was the ideal location because it is located on a plain in the Aragon Valley: from this strategic position you could obtain resources, control the passes and provide great resistance.

The Citadel is an outstanding example of he Spanish military heritage because of the excellent condition of its main elements. Since the castle has been always occupied and used as barracks, and since the military have assumed the commitment of their care and permanent improvement, the fortress preserves today its original structure and facilities. In this sense, in 1985 it was awarded the Europa Nostra prize by the European Commission. Thus, in the castle have been preserved the five bastions and ten casemates, the barracks, the moat, the drawbridge, the cover parapet walk, etc. The glacis now offers a large space with soft slope of lawn for recreational uses.

Loarre Castle is the oldest Romanesque castle and best preserved in Europe. It´s located on the natural border between Ebro river valley and the mountain range of Pyrenees, the castle dominates the Hoya de Huesca landscape from a cliff at 1070 m. above sea level.

The castle was built during the XI century in different stages that were meeting the different needs.

The first phase begins around the year 1020 by the great King of Sancho Sancho el Mayor, who in his eagerness to protect the Pyrenean counties from the Muslim attacks, takes advantage of the mountains of the Huesca pre-Pyrenees to install a series of forts that will create an authentic fortified border, of which Loarre will be one of its last links. Of this first phase the two main towers and the Romanesque chapel of Santa María stand out. The second phase is initiated by his grandson, the second king of Aragon Sancho Ramírez, around 1071, who with the support of the Holy See decided to surround the old fortress of his grandfather, which was still a frontier, with a large monastery that will house a order of Augustinian canons, uniting in Loarre the sword and the cross, the military and the monastic function. Of this phase highlights the impressive Church of San Pedro, a unique jewel of Romanesque architecture crowned by a spectacular dome.

Supported by the Pope, Sancho Ramirez surrounded the old castle of his grandfather with a great monastery for an order of Agustinian Canons monks, joining the cross and the sword, the military and monastic function in the same building. The most prominent build of this phase is the impressive St. Peter’s church, a wonder of Romanesque architecture, crowned by a dome.

The last phase of construction will be delayed until the end of XIII century, and it is the wall marked by semicircular towers that runs over 170 m of perimeter, and that surrounded not only the fortress, but also a small town emerged under the castle, and that is the origin of the current Loarre. It will be already at the dawn of the Renaissance when such a great fortress is finally abandoned leaving its presence undaunted at the top of the Sierra de Loarre.

Know more about Castle of Loarre